HOW TO: Birthday Geekery! Batman and Joker Cupcakes

This past month, two of my most wonderful friends celebrated their birthdays which offered up a fantastic awesome geeky cupcake inspiration. As these boys are Batman fans, and after seeing Nerdy Nummies video, I decided to give the Batman and Joker cupcake a shot!

These little guys were super fun to make, a little on the time consuming side but in the end totally worth it and great.

I recommend starting with cutting out the fondant Joker cards, as they need to dry out a bit. Using a roller and powdered sugar, roll out fondant and cut using your cookie cutter to desired card shape. I cut out my initial square shape, moved the cutter down the fondant square and cut out a card shape, keeping all of them as uniform as possible. If you don't have a cookie cutter, break out a ruler and knife! Cut out uniform little cards, using powdered sugar to prevent fondant sticking every where. I needed 12 cards, but made a few more so I had some to choose from.
Set them aside to dry before piping.

Next, work on the Batman logo bat and outline. I don't have the steadiest of hands, but whatever! I just went for it and tacked down wax paper on top of my Batman logo template and went to town. Melted the black coating chocolate, used a piping bag but a sandwich bag with the tip cut off works too! I should have used a #2 or #3 tip to keep the line thickness more consistent, but just snipping the tip of the bag worked well enough. I used a tooth pick to fill in gaps and get the pointy ends. piping pointy ends may not work, so just get as close as you are comfortable, and move the chocolate up with a toothpick. After filling in all the bats I needed, I set the sheet pan in the freezer to set up. 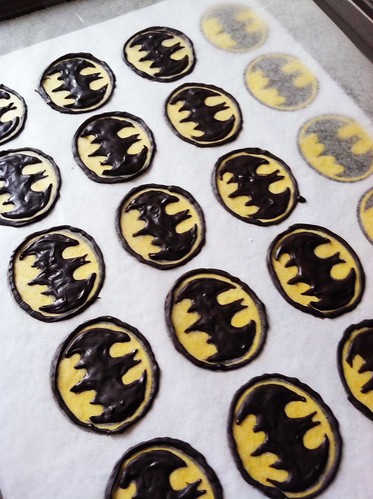 Dividing up the decorators icing, I tinted them green, red, purple and black. Then put them in piping bags with tips on the red, purple and black. I snipped the tip of the bag on the green. I decided on a general Joker look and just went for it. Taking a bit of inspiration from the Dark Knight's Joker and NN, I again went for it! Really, the design is up to you, but have fun! None of mine looked the same, but I am totally OK with that and enjoy it. Once all piped out, set aside to dry and firm up a bit. 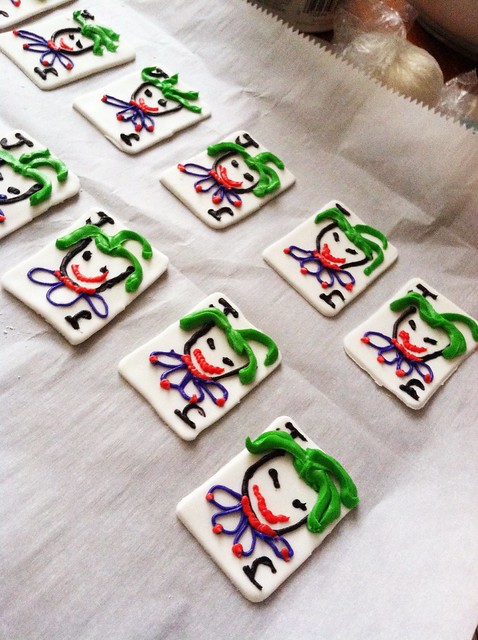 While the cards are drying, melt and color the white coating chips. I chose a nice yellow that looked wonky on it's own, but turned out well against the bats. Removing the bats from the freezer. fill in the negative space with coating chocolate in a piping bag with the tip snipped off. Doesn't need to be fancy since these guys are being flipped over. Once everything is filled in, back into the freezer!

I made a decent sized batch of buttercream and divided it into two batches. One batch tinted green and the other blue. Placing them both into piping bags with large star tips, I pipped a decent sized hill of frosting on each cupcake.

Once all the cupcakes are topped with frosting. Remove the bats from the freezer and use an offset spatula to remove them from the wax paper. Flip them over and place them on the blue cupcakes, firmly but gently pressing down.

I decided to place the Joker cards vertically on the green Joker cupcakes, super awesome until they fell off... So I pushed them in further. I recommend just laying them on top as well and pressing down firmly. ;) This also makes them much easier to transport. If you want to have them vertical, make the cards a day or two ahead of time and allow them to thoroughly dry out. But keep in mind, fondant hates water! 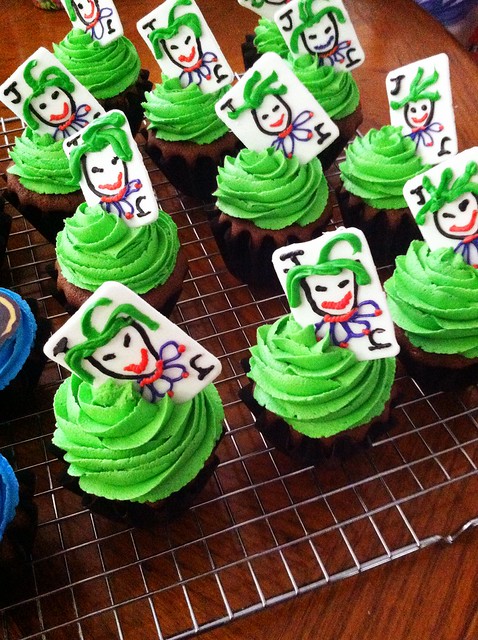 How fun are these guys?!

The birthday boys loved them and I had a blast making them. 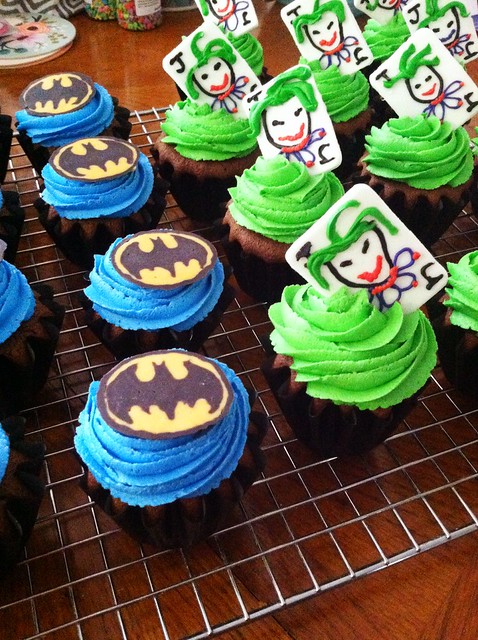